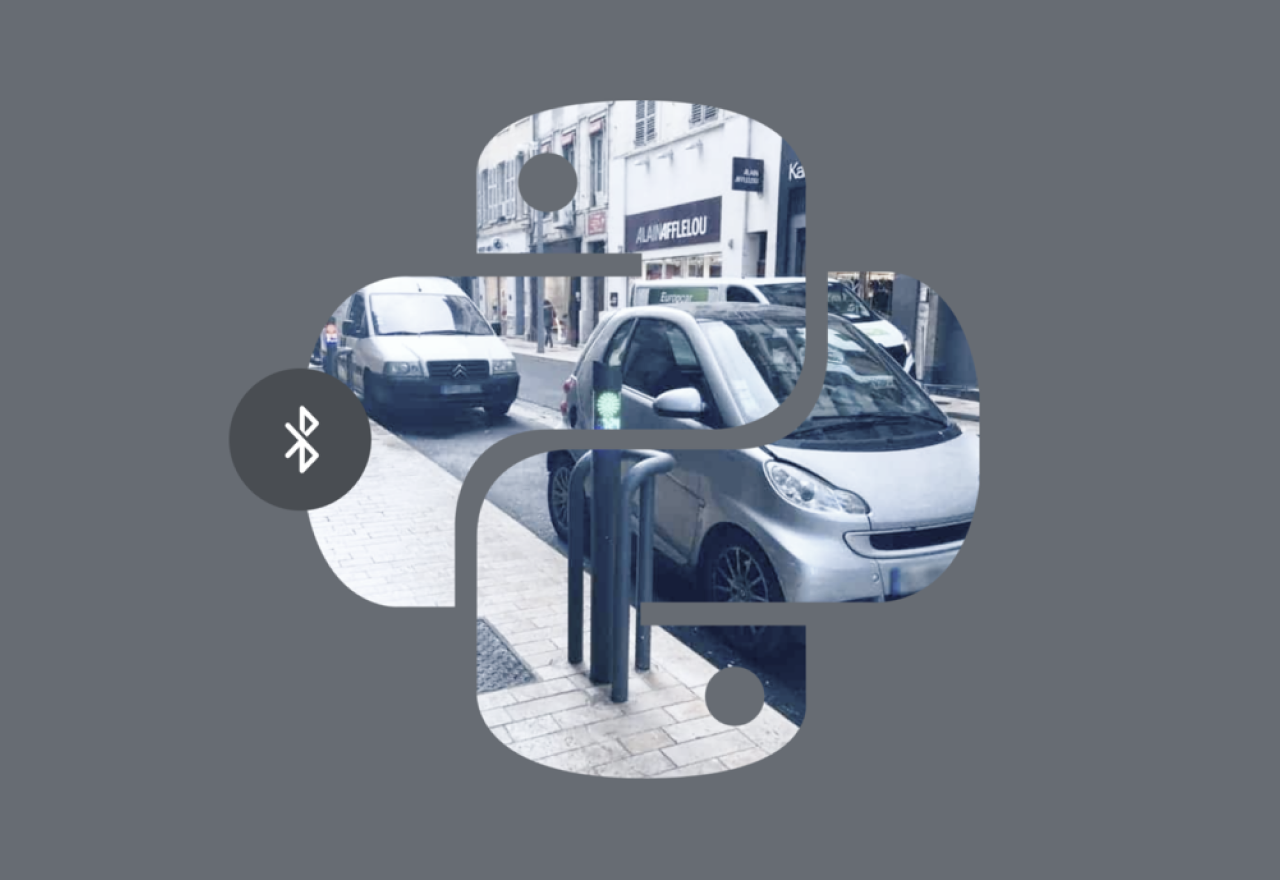 In this concept study we explore how a parking payment scenario could be realised from inside the vehicle using a local networking technology. While more and more new vehicles are coming online, a case can be made for highly efficient, short-range communications.

Short-range connections differ in several ways from over-the-internet telematics connections. Bluetooth connections, for example, can be used to detect proximity, and they run on a fast, local network which is not dependent on an internet connection. With a bit of creativity, these subtleties can be used to expand existing mobility services or to create new ones in the Smart Cities domain. Smart parking and smart charging are among possible use cases. In this post, we are presenting a sample parking meter application built using our new Python SDK.

The car in this scenario is acting as a moving beacon with its own unique identity. While the car is parked, parking attendants (either real or virtual) can detect a car’s parking status by connecting to it over Bluetooth, or via visual inspection of the license plate, since the meter is aware of the vehicle and its license plate number; this information will be available on the operator cloud. Other possible options include curb-side smart parking meters with visual indicators to alert traffic inspectors of infractions, such as exceeding the maximum parking duration.

This new addition to our SDK-suite enables developers to experiment with Bluetooth 4+ and vehicle-to-infrastructure use cases using a Raspberry Pi and the widely used Python programming language. The Python SDK simplifies the addition of smart devices in parking or charging use cases, which will play vital roles in streamlining transportation infrastructure. The SDK is already available for developers for experimenting, and the code behind our no-touch parking beacon concept study is available as well.

The smart parking meter in action

Here’s the scenario: in a city in the not-too-distant future, a Bluetooth-enabled street-side parking meter scans for Bluetooth-enabled devices (vehicles) coming into the vicinity and is able to communicate with them using High Mobility’s standardised car API - called the Auto API. When the smart parking meter detects a compatible vehicle in close proximity, it initiates the following sequence:

The smart parking meter sends the following prompt to the vehicle’s head unit via Bluetooth.

When the driver selects “YES,” the smart parking meter asks for the Vehicle Status via Auto API and records the license plate number it gets in response. The smart parking meter maintains a Bluetooth connection with the car, and triggers a new event when it detects that the car’s ignition has been turned off.

When the ignition is turned off, the smart parking meter starts a valid parking session for the car.

The driver leaves the vehicle, goes about his or her business, and eventually returns to the vehicle.

When the ignition is turned back on, the smart parking meter sends a new prompt to the vehicle’s head unit.

When the driver selects “YES,” the application ends the parking session and issues the receipt to the driver for the duration of the session.

In summary, the whole user experience from finding, starting and ending, and paying for the parking could be made super seamless. The driver could even allow some level of automation for the payments by marking often used parking areas as favourites.

While drivers are becoming more used to using smartphone applications for parking - using them often can become clumsy. Also, such smart parking meters would take much of the data traffic offline - making the infrastructure costs lower. A municipality could then employ aggregated real-time parking information from these smart parking meters to direct residents toward parking areas with available spaces and potentially reducing the amount of time city dwellers spend trawling for parking spaces.

It would also be possible to issue and revoke parking permits.

After several months, the city would have enough data to predict future parking availability as a function of time of day, day of the week, sporting and cultural events, and the weather forecast. This information could be sold to mapping providers to enable them to more accurately suggest public transportation when it would be advantageous.

The new Python SDK is available for download for all developers now. We encourage you to start prototyping your novel take to the painful parking experience, or any other potential short-range use cases, and test it out with the car simulators - for free.